Since our much-loved village church was first completed in 1381, a multitude of unheralded and largely forgotten volunteers, architects and craftsmen have laboured down the centuries to conserve, restore and improve the building. Indeed, as the structure is largely built of a relatively soft carbonate stone (often referred to as “clunch”), I suspect that the original builders would be surprised and grateful to see it still stands!

An introduction to the historic features of the church, please refer to the history page.  This sets the scene for the importance of conservation and restoration of the building.

Unfortunately a major restoration of the church in the 1920s included the mistaken application of cement render to most of the masonry, preventing the material “breathing” and resulting in severe erosion of the carbonate stone. Much of this render has now fallen away, leaving the damaged facings of the stone open to further erosion. This is particularly acute in the tower where a major restoration is required but is being delayed by a lack of funding. At the time of writing the TRG (Tower Restoration Group) is awaiting new guidelines for grant applications from the NLHF (National Lottery Heritage Fund) as the country emerges from the Covid 19 pandemic.

However, much work has been done elsewhere on the building since 2006 and is chronicled here:

South Aisle 2006 - 2009 – Repairs to Stonework and Windows to South and East Elevations. The architects, Caroe and Partners produced the specifications in September 2006 and the tender was awarded to Bakers of Danbury. The works continued through 2007 – 2008 and the Architect`s Final Certificate was issued on 2nd October 2009. 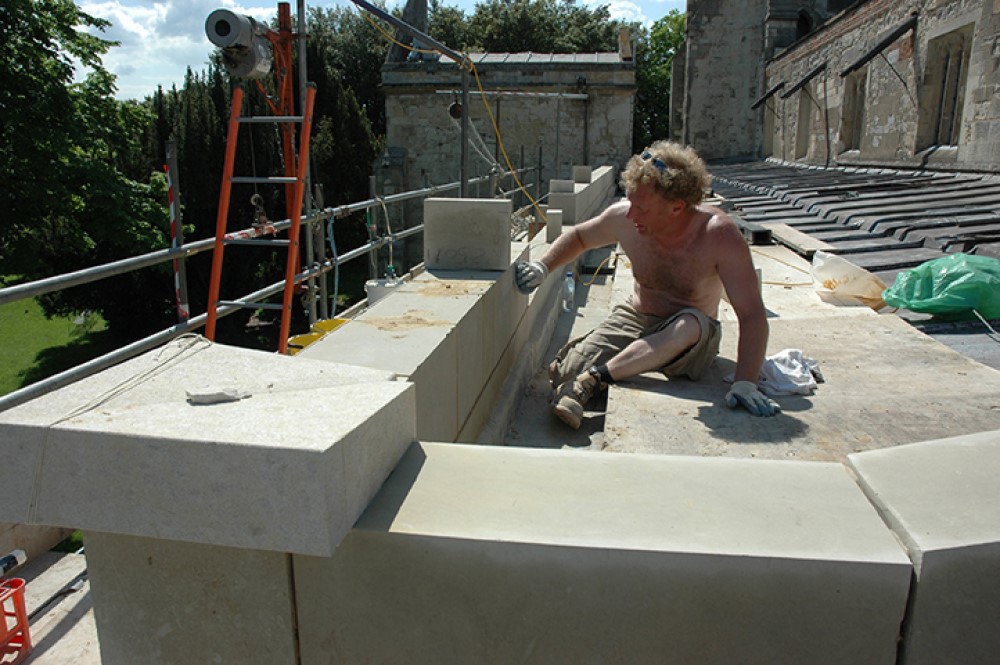 Stonework repairs included replacing all the coping stones on the parapets (above)  and most of the high-level string course, removal of cement render, brushing down and repointing of stonework of all five bays in the south elevation and the single bay in the east elevation together with all five buttresses. Considerable amounts of stone were replaced including hood moulds and mullions, but salvaged stones were relocated where possible.

The sub-contracting glaziers were Riverside Studio of Kingston upon Hull. All six main lights (windows) were removed for renovation to facilitate repairs to the mullions. The ferramenta was re-tipped, the tracery was restored and the rainwater goods were refurbished. The interior walls of the south aisle were replastered and redecorated. A stained-glass panel dedicated to the Fordham Family was also inserted into the south window within the Lady Chapel. 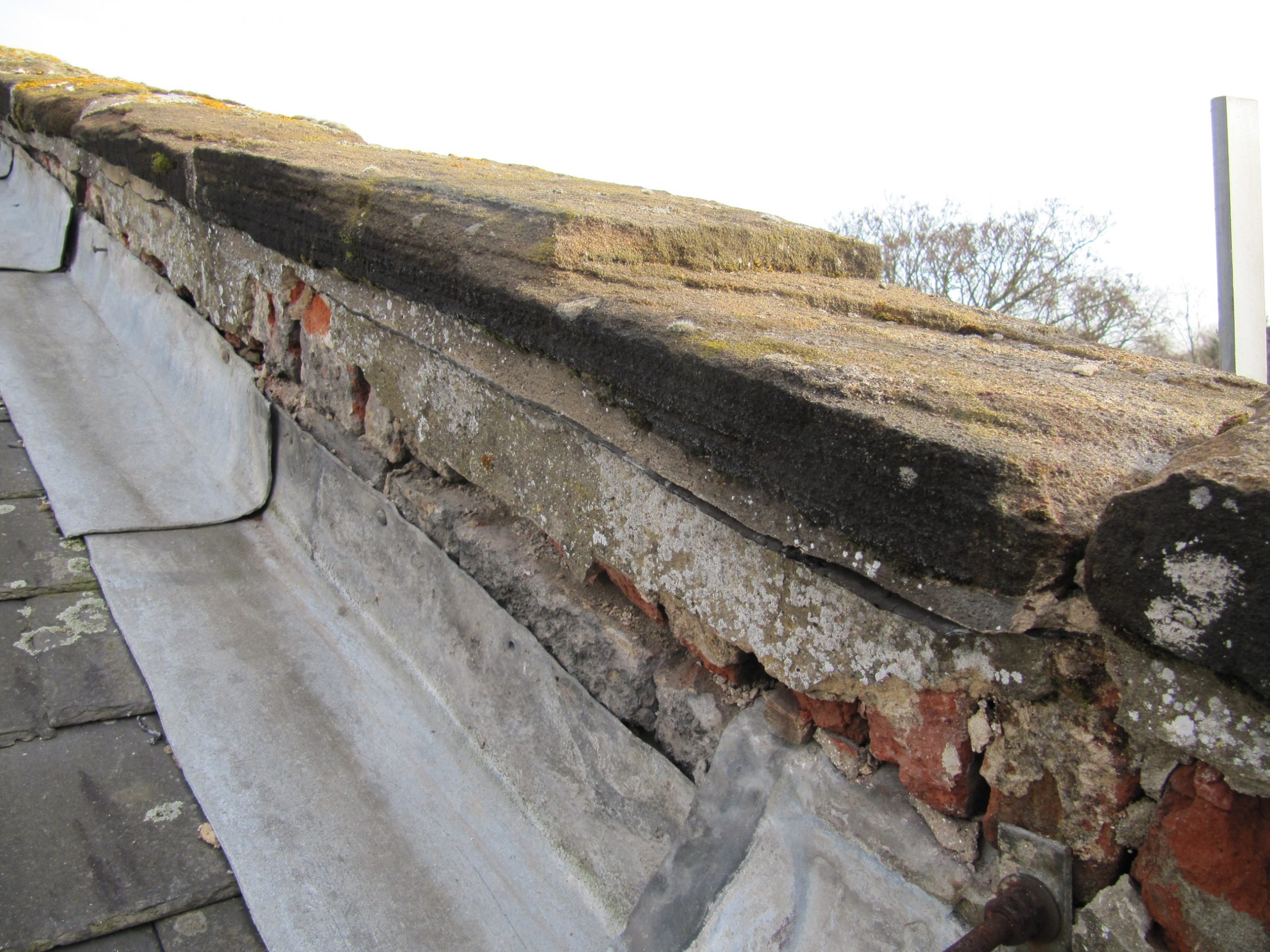 The main purpose of these works was to make the building more watertight and to improve the drainage away from the structure, concentrating mainly on the south side of the church. The repairs to the Nave East Gable were however quite extensive (above and below). 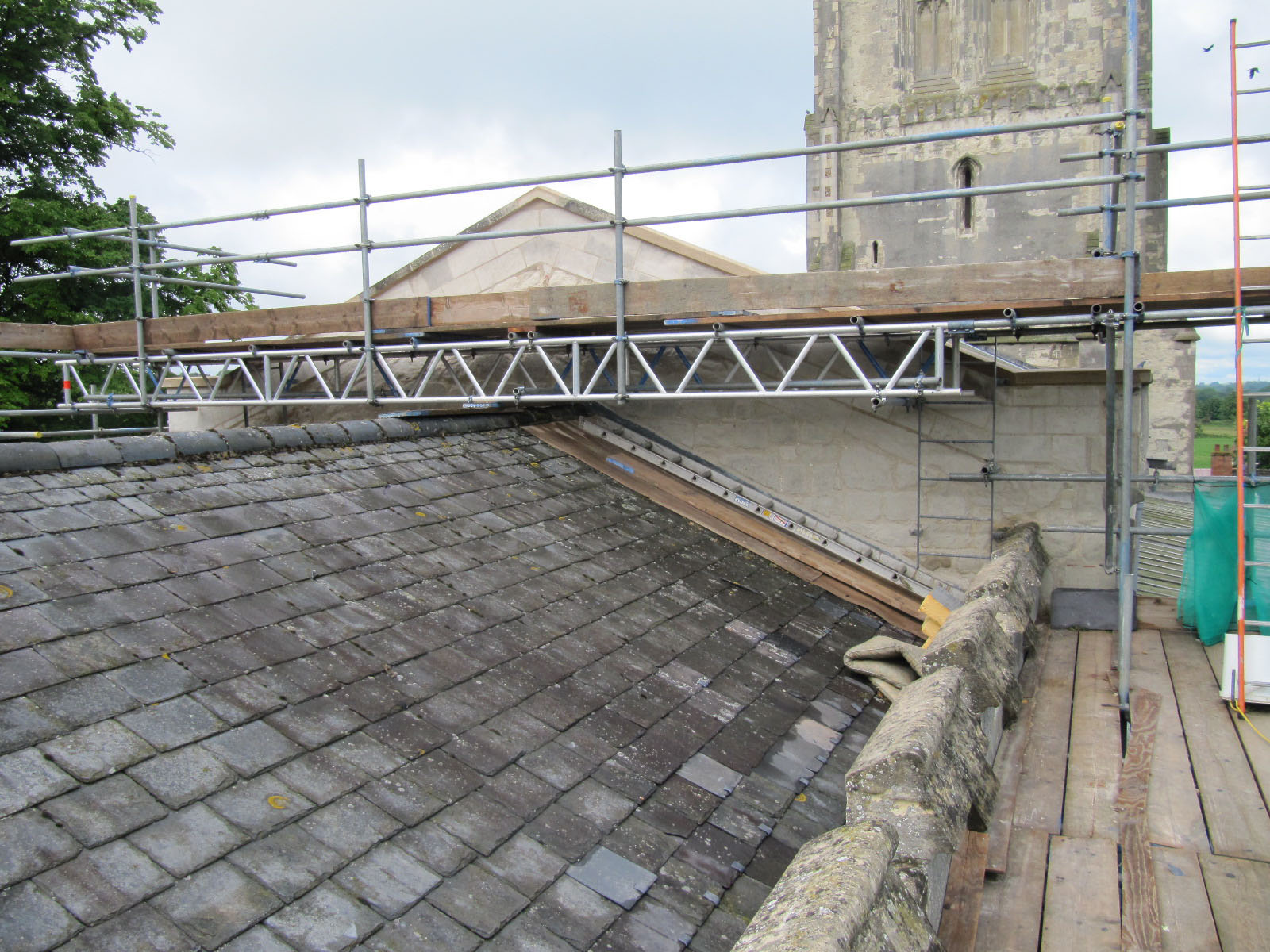 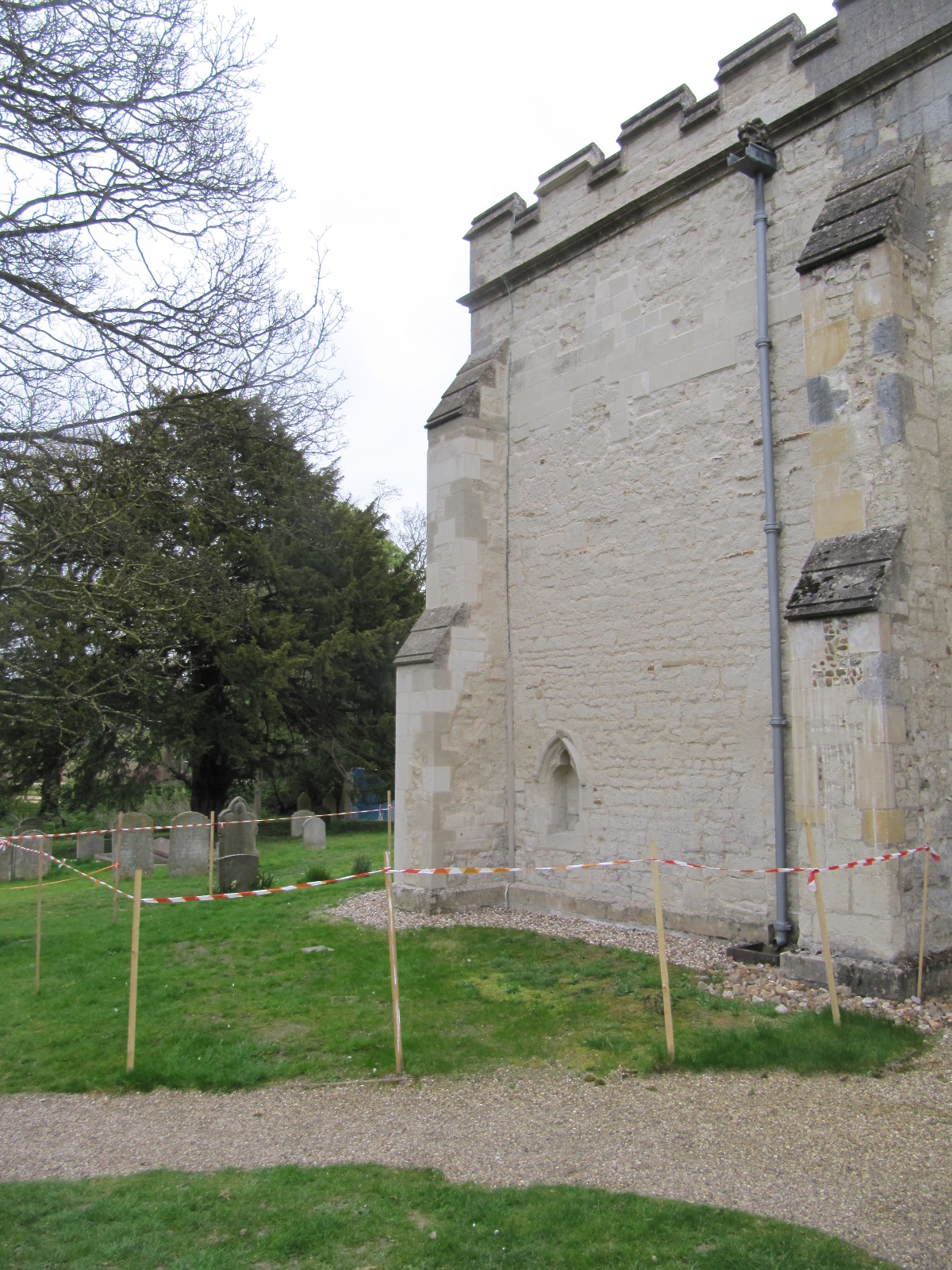 The architect was again Iain Frearson and the contractors were again R J Pinnock and Son. The purpose of these works was similar to Phase One. The Trial Bay work was intended to test out methods of cement render removal, re-pointing and limewash techniques for later restoration projects (above). An interesting trading token of Dutch origin was discovered during the soakaway excavations and is now in the village museum.

Chancel East Elevation masonry and window restoration 2014 – Full restoration of the east elevation of the chancel and the two pairs of buttresses at the south-east and north-east corners. Removal of the large east window for restoration by Auravisions of Ashdon, Essex. 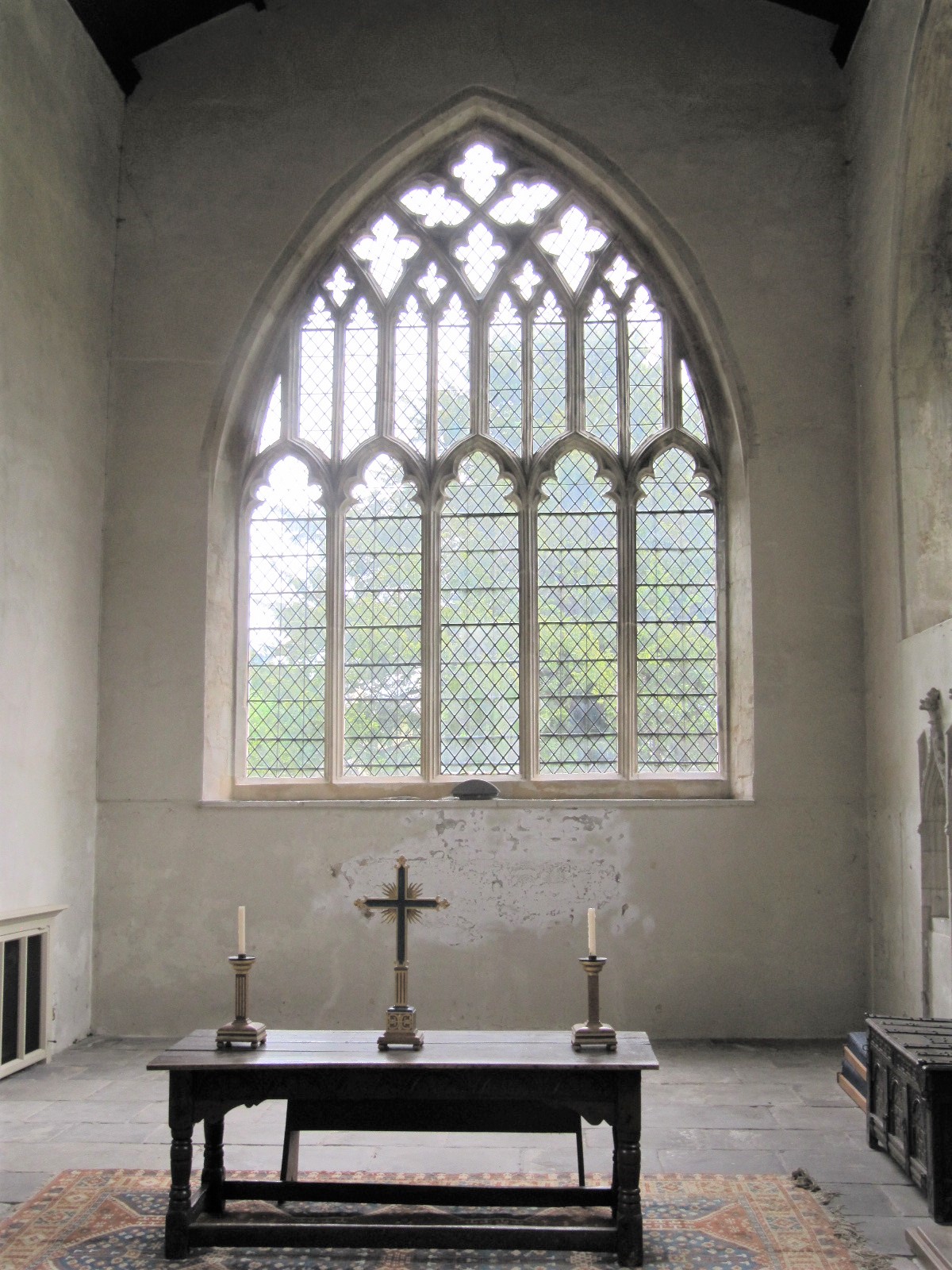 The necessity for this extensive restoration derives from a conversation I had with Jeremy Fordham some years ago. We were standing in the centre aisle of the nave and looking towards the east wall below the east window, where large areas of decoration were flaking away. Jeremy said that the decoration had been failing like that since he was a boy and that it never remained for very long. The problem seemed to be that the wall was covered outside by cement render and concrete tiles, preventing the underlying carbonate stone (clunch) from breathing (above).

Iain Frearson was again the architect and the tender was won by Lodge and Sons Ltd of Dunmow, Essex. 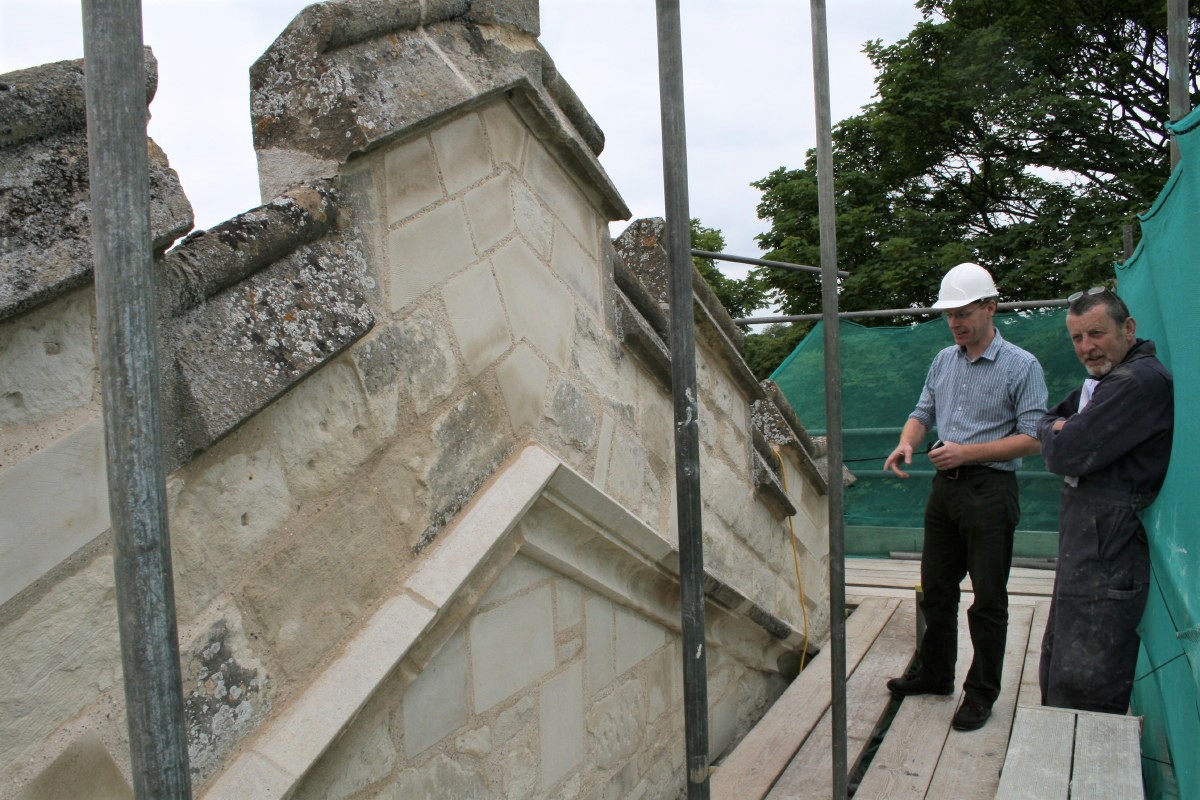 A full scaffolding was erected across the east elevation and buttresses and the north-east “trial bay”.  All the cement render was removed from the parapet, stringcourse and east wall together with the four buttresses. Any decayed or fractured stone was removed to a depth of 100mm. Much of the interior of the buttresses was found to be in very poor condition, requiring new stone to be inserted to greater depths. The wall above the window was very extensively restored including the parapet (above). Beneath the window almost all the stone was also replaced. Large amounts of the window tracery were also repaired. A fine colour matched lime-based masonry was applied to all masonry. Conservation was under the supervision of Matthew Beesley of Gem Conservation. Much of the glazing was bowed out of position with lead tags detached from the ferramenta, which were coming away from the stone jambs. The window was virtually rebuilt (below). 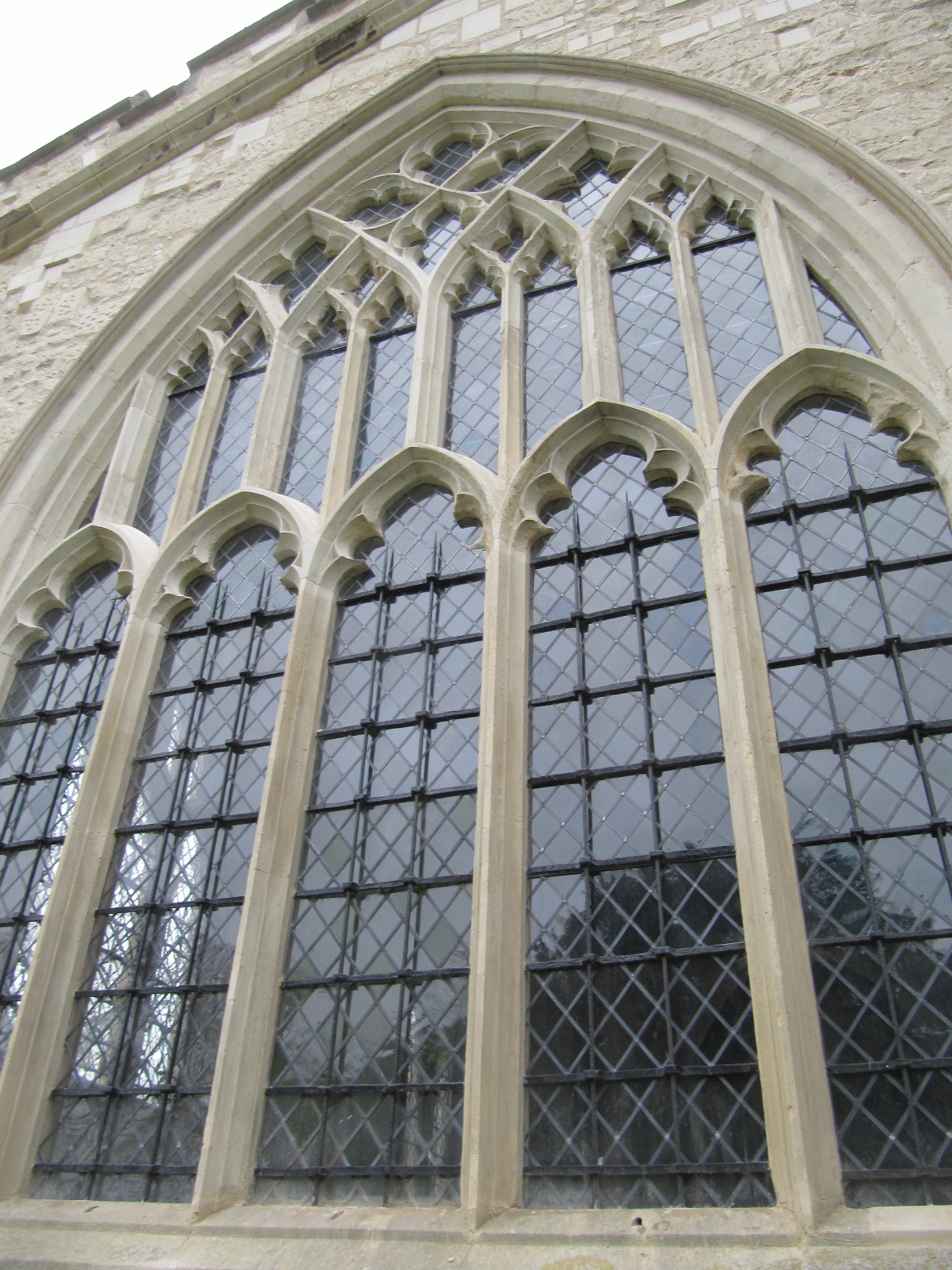 An interesting minor feature is a triangular “bat opening” in the north edge of the window to allow the creatures to enter the east end of the building. The completed east elevation is now very fine indeed (below). 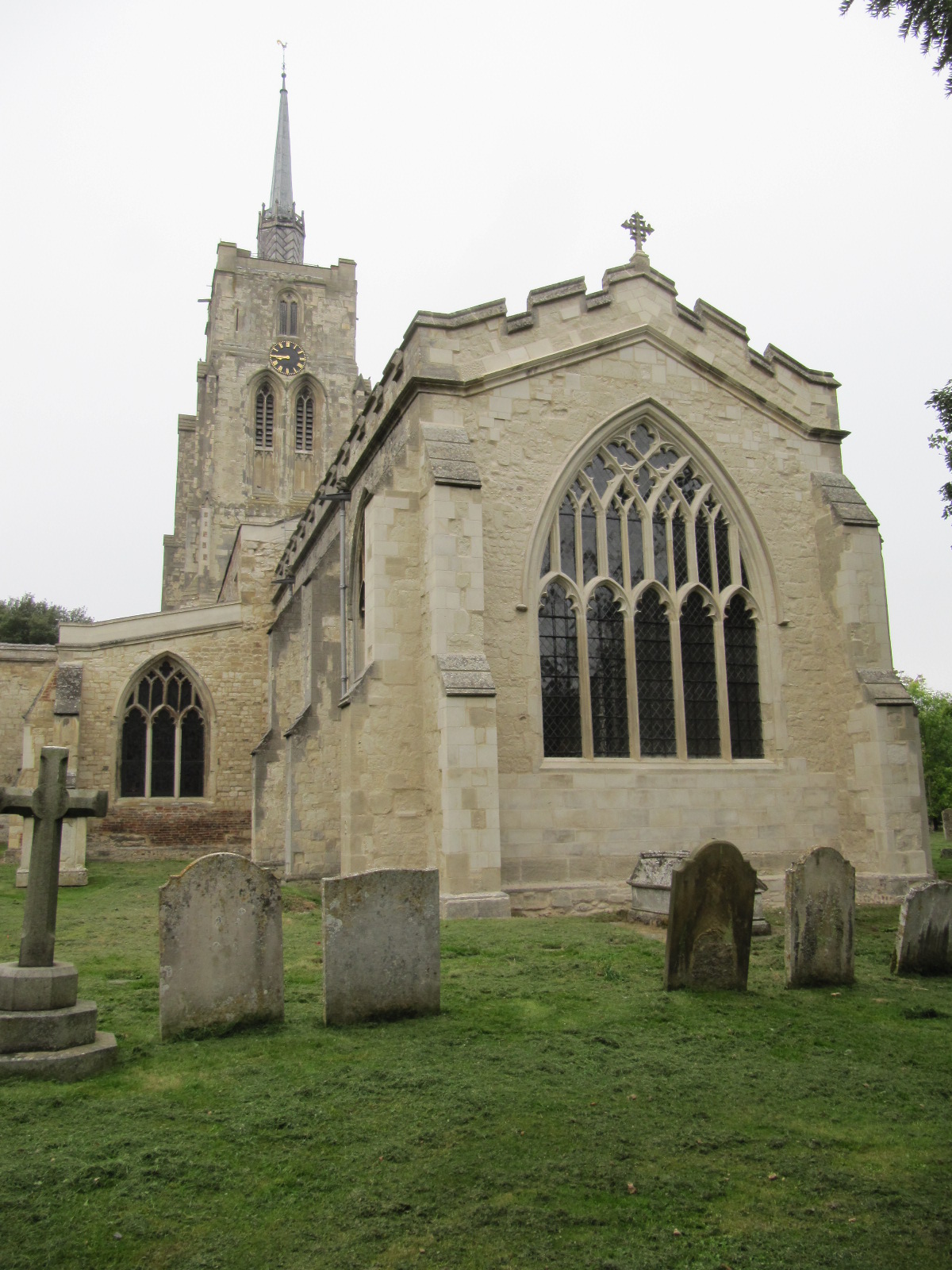 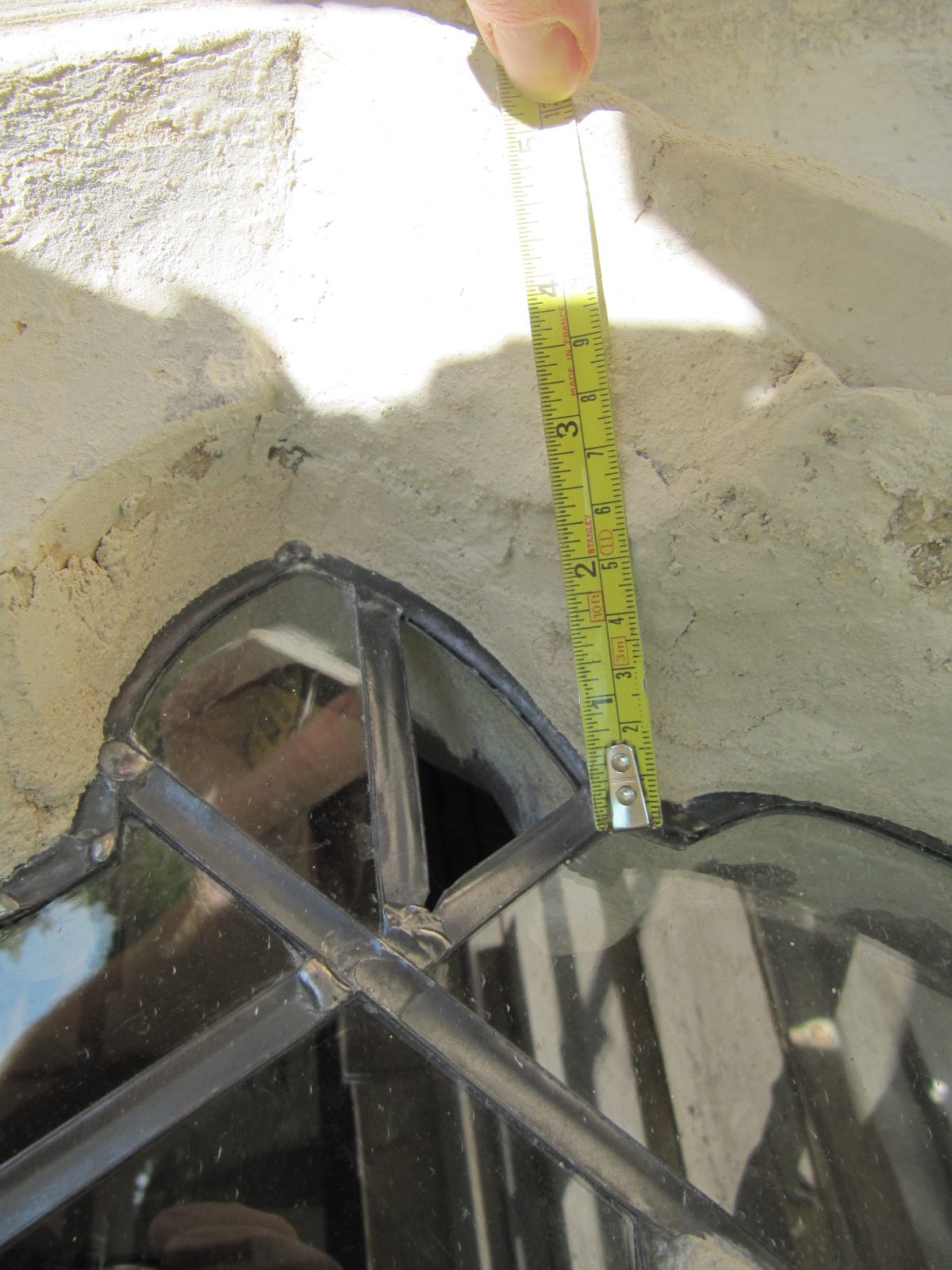 Chancel interior wall and floor repairs, redecoration, north and south elevation window repairs 2015 – This work was a logical compliment to the previous external restoration of the chancel and was intended to address dampness in the fabric and finish the restoration below the east window. Iain Frearson continued as our church architect with Lodge and Sons again being awarded the tender. 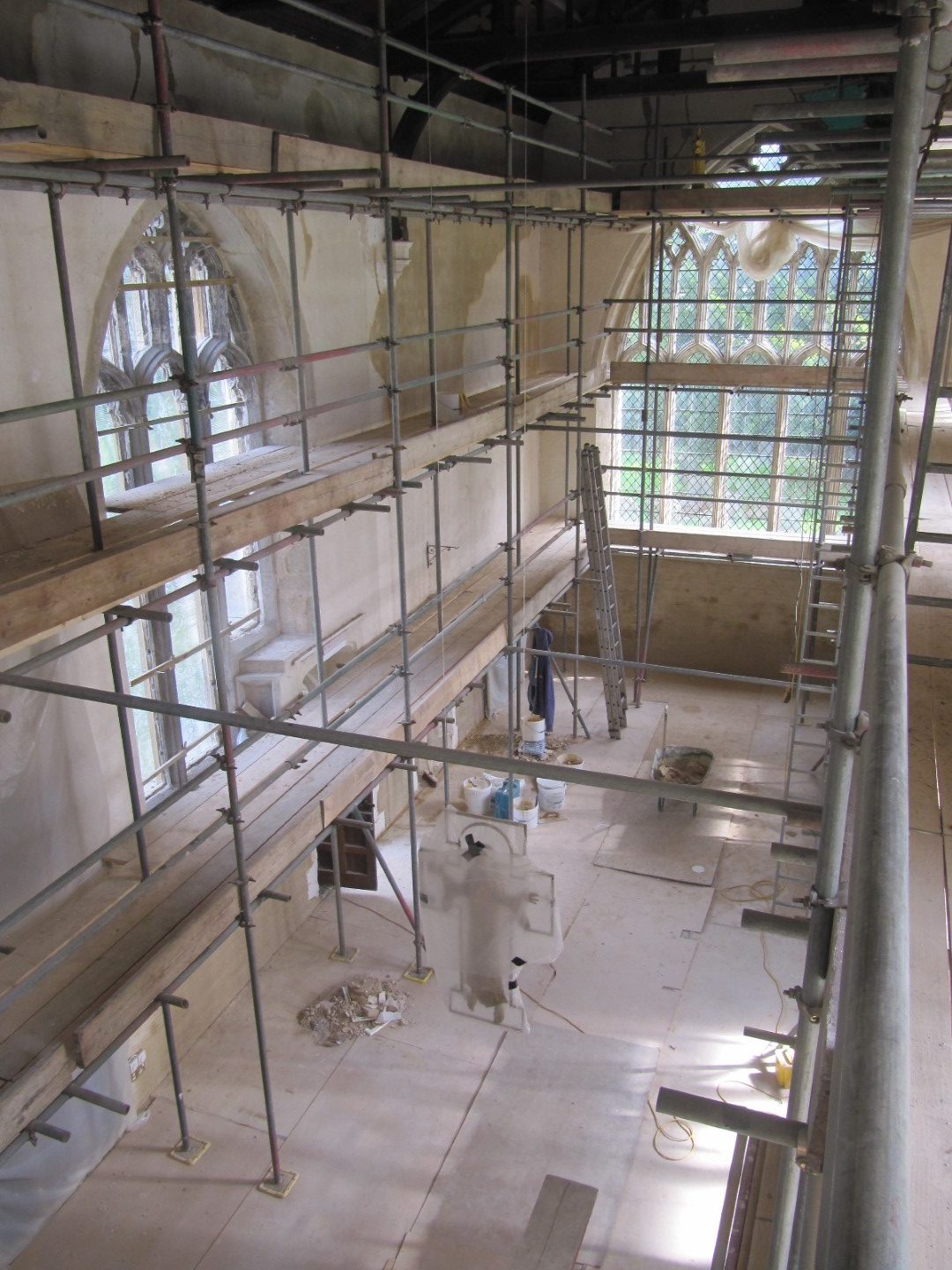 A full internal scaffold was erected, with a screen separating the chancel from the nave to allow services to continue during the works (above). The works included removal of loose/damaged plaster at high level which had been damaged by ingress of water. Failings in the roof drainage of both the north and south sides of the chancel roof were addressed separately around this time. At low level hard cementitious plaster was removed and all was replaced with lime-based plaster. Hard cementitious pointing in the chancel floor was removed and replaced with lime-based mortar. Unusually, a large section of the chancel floor is of “clunch” construction, inset into the surrounding York stone.  Approximately 15% of the slabs were cracked and replaced. Some stone repairs were also required to the window-sills and tracery of the north and south windows, the blocked doorway in the north wall and the piscina and sedilia in the south wall. Glazing repairs included some re-leading of the existing glass and re-tipping of the ferramenta in phosphor bronze. All the glass was subject to a conservation clean. Three coats of limewash were applied to all the interior plaster. A watch was kept for any archaeology but virtually nothing was found apart from a small section of frieze in the north wall which was recorded. Externally the French drain below the north elevation of the chancel was removed and the ground was re-instated. 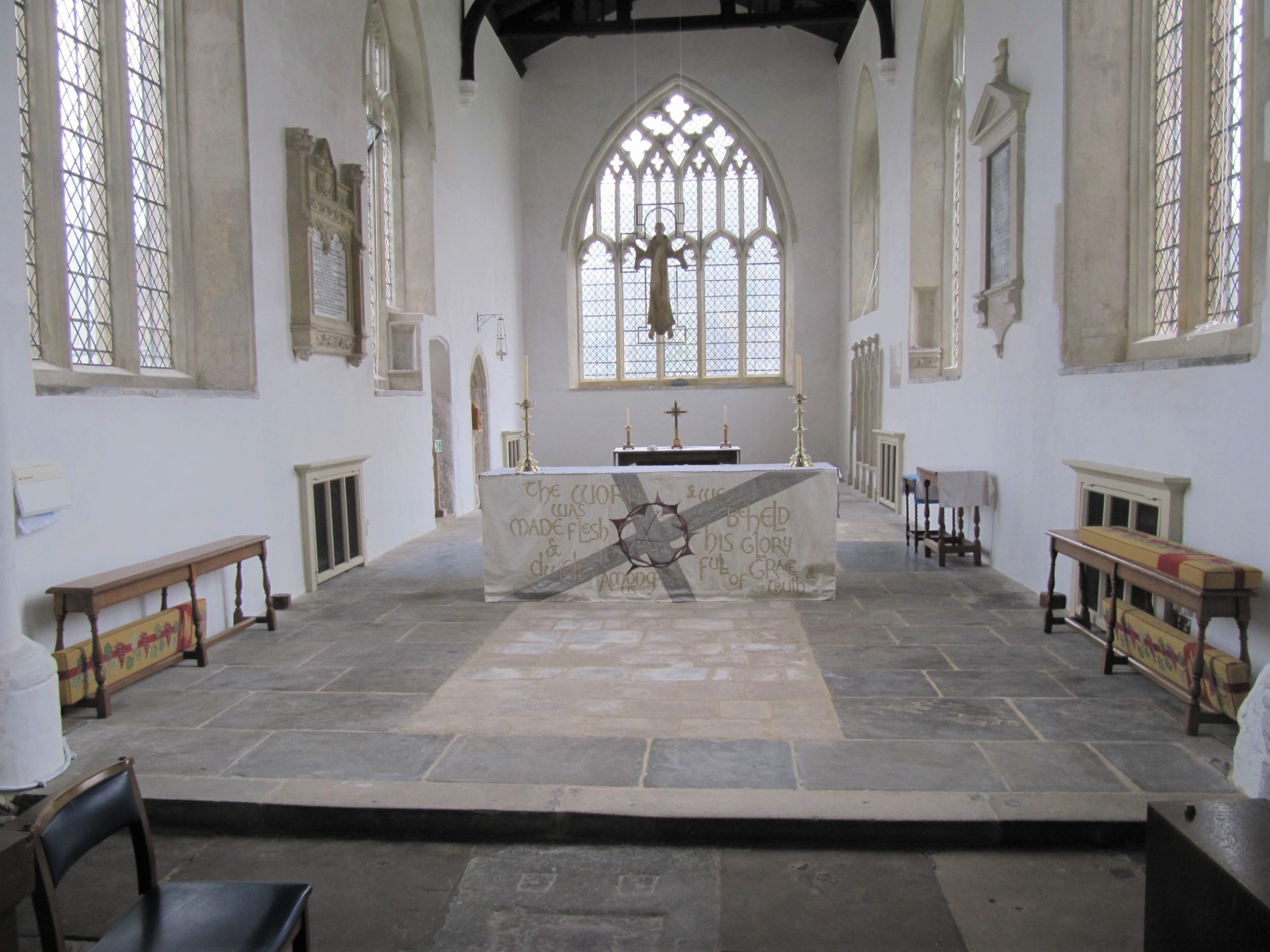 The final result was universally approved, with the removal of unnecessary furniture creating a clean uncluttered “monastic” appearance (above).

Other Restoration from 2007 – 2021 During this fourteen-year period a number of less extensive repairs were carried out on the church. These included the provision of a new water supply to the church after the original supply from the old rectory was lost after the sale of the building. There were also lead and timber repairs to the parapet walkway of the tower, lead and slate repairs to the nave roof requiring a scaffold and clearing out of bird and nesting debris from the interior of the tower. All the window screens in the tower were also renewed to prevent bird access.

Re-ordering of Church Facilities 2020 – 2021 - Finally, the toilet and kitchen facilities in the north aisle were replaced and extended with a new north porch lobby during the Covid 19 pandemic between August 2020 and April 2021.

We use cookies on our website to give you the most relevant experience by remembering your preferences and repeat visits. By clicking “Accept All”, you consent to the use of ALL the cookies. However, you may visit "Cookie Settings" to provide a controlled consent.
Cookie SettingsAccept All
Manage consent

This website uses cookies to improve your experience while you navigate through the website. Out of these, the cookies that are categorized as necessary are stored on your browser as they are essential for the working of basic functionalities of the website. We also use third-party cookies that help us analyze and understand how you use this website. These cookies will be stored in your browser only with your consent. You also have the option to opt-out of these cookies. But opting out of some of these cookies may affect your browsing experience.
Necessary Always Enabled
Necessary cookies are absolutely essential for the website to function properly. These cookies ensure basic functionalities and security features of the website, anonymously.
Functional
Functional cookies help to perform certain functionalities like sharing the content of the website on social media platforms, collect feedbacks, and other third-party features.
Performance
Performance cookies are used to understand and analyze the key performance indexes of the website which helps in delivering a better user experience for the visitors.
Analytics
Analytical cookies are used to understand how visitors interact with the website. These cookies help provide information on metrics the number of visitors, bounce rate, traffic source, etc.
Advertisement
Advertisement cookies are used to provide visitors with relevant ads and marketing campaigns. These cookies track visitors across websites and collect information to provide customized ads.
Others
Other uncategorized cookies are those that are being analyzed and have not been classified into a category as yet.
SAVE & ACCEPT